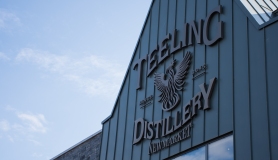 Last month (19th Sept ’17) I was in The Big Smoke – Dublin City for an event that evening, the launch of Teeling Whiskey – Brabazon Bottling #2, so it’s was only right that I took a trip out to the their distillery before heading onto the event.

The distillery is located in Newmarket, Central Dublin. 13-17 Newmarket, Dublin 8, a 30 minute walk from lets say that big spire on O’Connell Street (You can’t miss it!). They’re also located at stop 12A on Dublin’s “Hop On Hop Off” or conveniently located directly along the 27 Dublin Bus route. I decided it was best for me to walk out as I happen to know Dublin fairly well but also I wanted to walk as the sun was shining which doesn’t happen very often on these shores.

Approaching the distillery there is no chance of getting lost, with plenty of signage dotted around the nearby streets, and not forgetting a massive mural to the rear of the distillery, it’s worth having a look at it.

Round the front of the building… well have a look for yourself and don’t forget to look up at the phoenix standing tall.

Upon entering the distillery you’ll enter a fantastic reception of steel, wood & concrete, very urban and again don’t forget to look up to see lights made from barrels. If you arrive with a decent amount of time before your tour there is a small art gallery / pre-tour that will give you so much interesting history on distilling spirits in Dublin & the Teelings themselves along with a few little gems, wine & whiskey bottles, one of which is an old William Jameson & Co bottles. (This can also be viewed after the tour but I found it useful pre-tour).

I had the pleasure of head tour guide, Eve (Read a little about Eve here) hosting my tour. From the outset it was very clear Eve knew what she was speaking about & it wasn’t a case of a well rehearsed word for word script. The tour started with Eve welcoming me & explaining a little of the back story to whiskey in Dublin & Teeling before a short video is played. It’s then onto the really fun bit via two big black doors, a working distillery, which sets it apart from the nearby Jameson Distillery, Bow. St.

Entering the working parts of the distillery I noticed right away a very different smell from the last time I was down. That ludicrously good smell was one of Teeling currently distilling a pleated malt. As there isn’t a malting floor in Teeling they’re currently sourcing it from Scotland – Port Ellen would be my guess. We’ve only to wait at least 3 years & 1 day now to try it. 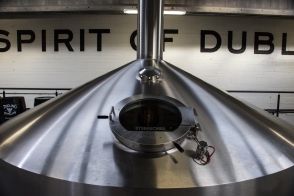 You’ll come across four fermenters on your tour, two traditional wooden washbacks with a capacity of 15,000 litres, and two stainless steel washbacks with a capacity of 30,000 litres. This is Teeling merging the old with the new. It’s these small things that Teeling do so well, while pushing the boundaries forward they make sure to keep some of the old.  You’ll also notice all the washback lids are left open.

Next up after the fermentation process its the distillation. The wash is pumped across to three copper pot stills, custom built by Frilli Impianti in Monteriggioni, Italy. Aprox 60km due south of Florence. The three stills are named after Jack Teeling’s daughters: Alison, Natalie and Rebecca. You’ll see their names on each still. Stephen Teeling has since had a baby daughter come into the world named Zoe, bets on for what gets named after her.

The distillation process summed up in 3 steps:

It is the third distillation of Irish Whiskey that gives it different characteristics from Scottish Whisky, though there are exceptions for both as to how many times it goes through a distillation process.

The capacity of the three stills are:

They may not be the biggest stills out there, but dam they’re mighty fine to look at.

The Spirit Safe – in short, a padlocked box designed to keep the spirit as it exits the still away from the thirsty mouths of distillery employees before it could be taxed. The tax man used to be the only lucky lad with the keys. Now a day it’s more for show and is all calculated via computer. You’re tour guide will explain it at greater length and better detail.

Onward to the maturation process and The Angels’ Share.

In Ireland, Irish Whiskey must be aged for at least 3 years & 1 day in wooden casks to be called “Irish Whiskey”. Ex-Bourbon barrels are the norm within in whiskey industry with a few others out there. Teeling currently have over 40 different cask types in use. That’s a big number and a wonderful thing at the same time, experimenting is everything. How else will the industry move forward?

If you think distilling the whiskey is the key factor of making whiskey, you’re wrong. The maturation process is a massive part of the overall process. Lining up all the factors is a an art form. From the choice of barrel, how long it stays in that barrel, should it be changed to another barrel after a period of time and the climate it is stored in. Get this right, and you’ll have award winning whiskey, and Teeling have won many of awards!

During this part of the tour you’ll see three small bottles (as seen in the blow image). These 3 bottles show the ageing process and how the wood effects the colour, from new make spirit (never touched wood), to 3 months and then 3 years.

We then have The Angle’s Share. What’s the Angle’s Share some of you may ask. Well I’ll tell you. As much as 5% of the volume of the new spirit that is put into a cask will be quickly absorbed into the wood when it is initially filled. A smaller proportion, up to 2%, will go right through the grain each year and out into the atmosphere to be lost forever. It is therefore not uncommon for a cask that is fifteen years old to be half empty by the time it is bottled.

A number of physical factors can influence the rate of loss. The skill of the cooper who made the cask. Oak is a natural substance that varies, and so there will be differences between casks, even if they were made at the same time by the same cooper from materials from the same source.  The skill and attention of the warehouse man also comes into play over the years.  Casks that are turned regularly will not develop the tiny cracks which form over time in those staves which are not in direct contact with the liquid. Humidity levels in which the casks are stored.  Casks stored in humid conditions lose a greater proportion of alcohol than those stored at lower humidity levels. Conditions of low humidity draws more water through the staves – leaving a higher proportion of alcohol in the cask.  So the rate of loss is not consistent.  It varies according to geographical location.

So basically the whiskey that is lost gets the name – The Angel’s Share. Lucky Angels must always be steaming!

On previous tours I have booked myself onto the 3rd option, this time I’d be trying the Teeling Trinity.

3. Single Malt –
Nose: Intense white grape juiciness on the nose, joined by fresh malt, developing into white chocolate the longer it’s in the glass.
Palate: An elegant expression, this. Well placed fruit, backed up with cinnamon and white pepper. A touch of dried flower petals along the way. Strawberries?
Finish: Definitely strawberries, with fresh double cream too!

For me it was the Small Batch that got me into Teeling. Despite now owning a fair amount of their range, I still find myself enjoying a pour of Small Batch on a regular occasion. I can clearly see why their Single Malt has won many of awards.

Eve informed me that the Small Batch would be their biggest seller and that the Single Grain would be the most popular with North Americans.

After your tasting is over it doesn’t mean your time at the distillery is over. Why not head to the Bang Bang Bar for another tipple, The Gift Shop to bottle your own whiskey of buy a book & maybe the Cafe for some food before hitting the road. 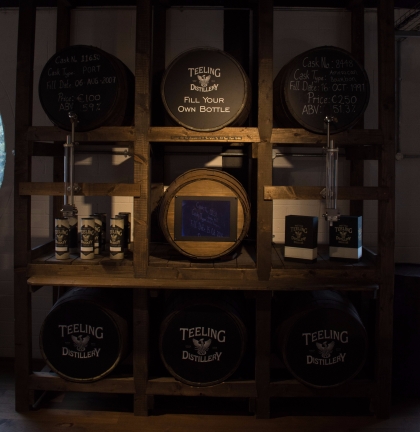 The Gift Shop
Pick up a whiskey glass, a book, craft foods, a bottle of whiskey or even bottle your own.

Phoenix Cafe
Sit back & relax, have a chat about your experience at the distillery, fill the tank before heading onto your next destination with a selection of tea, coffee, soft drinks and food.
I highly recommend the BBQ sausage roll!! The Cafe is also open to the public during the day if you’re not taking a tour.

It’s very easy to sing the praises of a distillery when you’ve been hosted for the afternoon, but I can wholeheartedly say out of all the distilleries I have visited this is up there as one of the best. Informative but not over loading that you’ll go away confused or forgetting information you’ve been told, but something else that really stands out to me, this is working distillery and the cleanliness as you go around is fantastic.

I’d like to give a massive thank you to Rebecca & Lili for organising the tour & Eve for a top tour.

P.s. I didn’t tell you this and if you get caught i’ll deny it 🙂 On your way out be sure to sign the wall to mark your visit! (Please don’t sign any other wall!!)
If you can find my name (Whiskey JAC) on this in 3 places let me know!