Whisky Live London took place across two days, March 31st & April 1st 2017 at the Honourable Artillery Company in London. The line up included 32 exhibitors ranging from the USA, Ireland, Scotland & Japan to name but a few.

For me the show was all about two things, the rumours that I picked up on from Twitter that Teeling Whiskey would potentially have two new bottlings hidden under the table and also Highland Park would have a new release. It may have been April Fools, so keep reading to find out if they were fooling us or not.

With a 7am flight from Belfast to London it was going to be a long day but one well worth it. Touching down in London I met up with fellow whiskey (sorry bourbon) blogger, Bourbon Paddy. (B.P for short). Upon entering the show & receiving our Glencairn Whisky glass & a 35cl bottle of Highland Park 12 year old, there was no stopping B.P, he was of like a horse at the races, bypassing all the fine Scotch & Irish Whisk(e)y on offering to head straight to the Michter’s stand.

With a fine range of sampling on offer we got stuck in. First up was Michter’s Sour Mash, beautifully rich & spicy, with an abundance of cinnamon, butter and nuttiness, plus a hint of black pepper to invigorate the palate.

Small Batch Bourbon then followed. Appealingly rich notes of barley sugar, raisins and dried fruit, with a balancing touch of fennel & baked bread. On the palate it offers well-defined flavours, rich, spicy, juicy fruit & cinnamon. The dried fruit hangs on at the end.

While at the stand, I was introduced to Stefanie Holt of Speciality Brands, as B.P. & Stefanie were previously speaking on email we managed to try some under the table Michter’s Rye 10 year old, 2016 release. WOW, just wow, for me not being massively into the bourbon & rye scene this is up there with some of my favourite Irish & Scottish whisk(e)y.

Fantastic pronounced oak smells up front and intense spiciness. Also rich, with a bitter-chocolate note. Lighter in the mouth than expected, but there’s still a punch of spicy rye character. Delightful delivery with the spicy and long finish you’d expect.

On wards to That Boutique-y Whisky Company for a chinwag with James Coggin and some sampling of course. 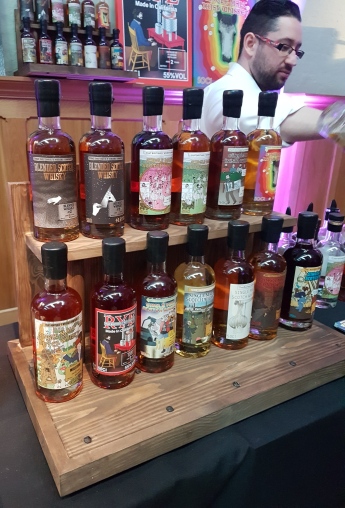 Earlier this year That Boutique-y Whisky Company released a 24 year old Irish single malt, the first Irish whiskey bottled by the company, so of course that was on my radar along with their second Irish whiskey release, a 14 year old single malt.

A smell of fragrance & fruits with notes of kiwi, peach, gooseberry, plus grapefruit. The taste buds get grapefruit with gorgeous, little hints of oak notes you’d normally get with older single malts. For the finish it’s one of fragrance and fruits again, with more subtle touches of oak and even a suggestion of dark chocolate.

All kinds of YES PLEASE for this one.

Smells of butterscotch, blackberry jam and also a small hint towards smoke. Tastes of rich chocolateyness complete with warmed orange peel. Maybe also hints of tobacco. Finished on a nutty coffee with caramel notes and hints of fruit.

Who cares if my notes are of, or you got something else when you tried it, this is scrumptious!!

It came to that point, the one I had been waiting for all day, Teeling Whiskey. Would they, or would they not have The Revival Vol.IV and the mysterious black bottle with no label that Jack Teeling posted a picture of on Instagram recently.

Trying to play it cool I started chatting with one of Teeling’s ambassador’s while sipping on their award-winning Single Grain from the World Whisky Awards 2017. After a few minutes of looking around I didn’t spy what I wanted, so there was only one thing to do, out right ask “….do you have this new black bottle thing at Jack posted a picture of?” From under the stand the ambassador pulls the bottle out to my delight. Glencairn glass in hand I’m almost begging him to hurry up & pour it.

Brabazon Bottling, Irish Single Malt, Maturation – Sherry Casks, Non-Chill, 49.5% Alc/Vol. Matured in 6 different sherry casks, Oloroso & PX were the only two casks I could get confirmed. Due for release mid-may. I couldn’t get much more details on the product.

In my delight and excitement I didn’t take any notes, sorry, apart from it’s a SHERRY HEAVEN!

Later in the day I had the pleasure of attending “The Revival of Whiskey Making in Dublin” master class with Stephen Teeling.

A line up of Teeling’s Spirit of Dublin, Revival Vol. I, II, & III and YES REVIVAL VOL.IV! 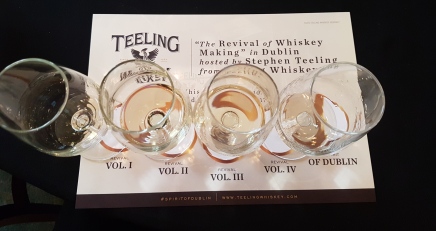 As I already said this is the one I was hoping would be at the show, after Twitter exchanges with Teeling in the hope they’d confirm it.

I’m going to skip my review on Vol.I, II & III as I have previously written a blog on them.

Teeling Revival Vol.IV, a 15 year old single malt finished in Muscat casks from Portugal for 12 months with a 46% Alc/Vol.

We got a very small sample to work with, as you can see from the photo Stephen only had a 500ml bottle with him so it was to be shared lightly. We were given no RRP or release date.

Nose – Fruits of which I couldn’t fully pick up. Maybe a very subtle touch of marzipan and aromatics.

I can’t wait to get my hands on another sample or when the bottle comes out.

Stephen had some good stories to tell from growing up in the distilling industry, how his dad likes to high-jack tours around Teeling Towers (Distillery) & many other things that made us laugh.
I had a question for Stephen about Teeling testing a yeast strain. In Ireland there is only one yeast, a distillers yeast. Alex Chasko – Master Blender thought it would be time for change & a little experimenting. It’s worth reading about it on detail here. The feed back has been good so far during testing.

DAY MADE!!! Getting to try The Revival Vol.IV & Brabazon Bottling.

P.s. from the horse’s mouth (Sorry for calling you a horse Stephen) Revival Vol.V is planned to be a creation of the previous 4 releases in some way.

Milroys they’re the oldest whiskey specialist based in London. Three options where up for sampling.

A speyside that is truly bold in the sherried department & heavy on prunes & dates with a fantastically long finish.

A fantastic little trick this whisky has is that it holds up to 9 parts water, 1 part whisky. YES you read that right & I called bulls**t at the time upon being told it. So into a glass goes 1 small part whisky & 9 parts water & down the hatch it went to my amazement. Though no where as strong, all the flavours were still very much present.

A small brand from Derry, Northern Ireland and are currently building a new distillery which should be making their own spirit soon. An investment of almost £14 million, £2million of which is going towards their visitor centre. For a small brand they’re becoming quite something at winning awards against their 8 year old Single Malt & Blended option.

Until the show I hadn’t had the chance to try their new 8 Year Old Oloroso Cask & 12 Year Old Single Malt. 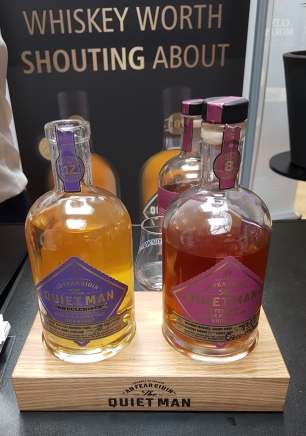 A nosing of pencil shavings, dried fruits – apricots, sultanas & figs. Slight sweet touches of citrus peel, boiled candy and vanilla. The taste takes you down an avenue of Fruit and juice with a slight salty nut tang. Oak adds good structure in the mouthfeel department. The sherry cask adds just the right amount of character to keep things interesting.

On the olfactory nerves (nose) it’s light, delicate with aromas of pineapple, lemon, orange peel, honey and vanilla. In the trap (mouth) it presents a soft and smooth feel. Flavours of tropical fruits, honey, citrus peel and gently spicy oak. The finish is medium.

A brand worth checking out across their range of 4 products at current. 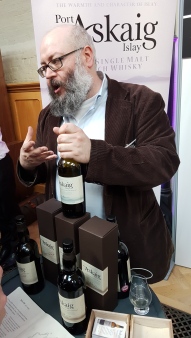 At the Port Askaig stand, Billy Abbott was on hand to pass on his fountain of knowledge & answer any questions.

I’ll hold my hands up, Port Askaig is whisky I’d never tried before or knew much about apart from the peat factor.

Port Askaig 100° Proof, a cask-strength from Islay. Bottled at 57.1%. Meat & smoke, oh the smoke, burning logs and the smell of the sea enter your nose. Minerals to start, turning sweet with milk chocolate then onto cinnamon apples and some more smoke. Finishing on notes of sweetness and spice that lingers around. 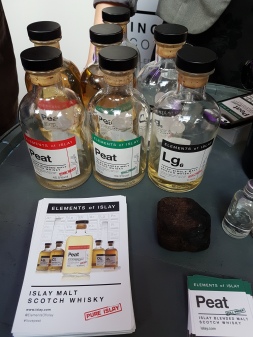 From Speciality Drinks Ltd, Elements of Islay is a range of single malt whiskies from the island of Islay. Each carefully selected and bottled to best express the character of the distilleries of the island. Each whisky draws its inspiration from traditional medical laboratory labels and packaging.

Billy Abbott was once again on hand this time burning some peat so we could get the amazing smells from it & also vouching to “destroy” our pallets with the PEAT FACTOR in the form of Oc3. A warning not taken with pinch of salt at all. 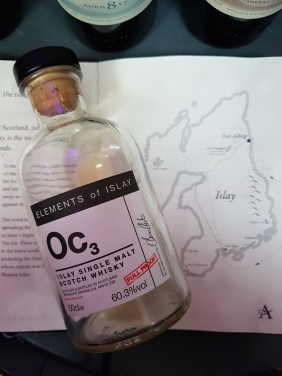 Oc3 from the distillery that produces the worlds peatiest whiskies, Octomore. Oc3 is a 7 years old & bottled at 60.3% Alc/Vol.

There is no hiding, this is EXTREMELY smokey but also contains balanced fruit flavours and a very long-lasting finish.

Pallet destroyed for a while, a glass of water & a cracker were needed, BUT DAM IT WAS GOOD!

Rumours were abound on the World-Wide Web as far back as November 2016 that Highland Park had a new whisky for release after images surfaced on the T.T.B Public Registry (Alcohol and Tobacco Tax & Trade Bureau) a fairly reliable source for new whisky coming to market, though a fair few never make it.

The rumors were true, there it was, pride of place on the Highland Park stand as you entered the exhibition. Unfortunately my one fatal error of the day was planning on coming back to the stand as the queue was already lengthy. By the time I returned they were out of stock, no sample for me, GUTTED!!

So no tasting notes from me on this one, just a few details that are already in the public domain. 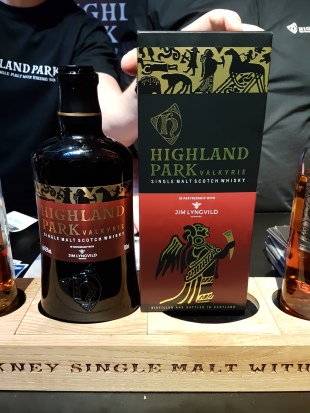 That was my day done, dinner & bed was on the cards. What a day it was at my first Whisky Live Show & first ever whisky exhibition. Next up, The Whisky Exchange Whisky Show at the end of October. Hopefully I’ll see some of you there.