Infusion – the introduction of a new element or quality into something.

For £5.99 can whiskey infusion sticks from A Little Oak turn a £17 ($21/€20) bottle of Bushmills Whiskey into something better? (Crosses fingers for Bushmills 21yo). Not that it’s a bad product or anything, I rather enjoy a tipple or two of Bush.

You can read their story behind the product & how the company started over on their site (A Little Oak).

The old guard of whiskey drinkers among you may hate the thought of this, but for me I love the idea of experimenting with whiskey. There is no doubt in my mind at all that the traditional way of maturing whiskey is the best way BUT with aged statements becoming increasingly less on the shelves & NAS’s (None Aged Statements) taking over, surely this is a good thing if we can find a way to make NAS Whiskey better over a few days or weeks rather than a number of years?

When Lewis approached me recently & asked if I’d like to try their product I was more than happy & jumped at the chance.

So, what is the product & how is it meant to work?

For £5.99 you get two handcrafted & charred American White Oak sticks.

The two sticks are meant to mature the whiskey at a faster rate than a barrel due to the higher oak to whiskey surface area.

Pop one or two sticks into the bottle of whiskey for a minimum of 24 hours and up to 2 weeks depending on the time you have free to experiment. The infusion sticks can be used in other spirits, home brew, wine and can be reused.

My original plan was to place one stick into the Bushmills for 1 week, but due to me being impatient & wanting to see how it turns out, I popped both sticks in for 1 week.

Before I popped both sticks into the bottle I took a 50ml sample of the Bushmills to compare it with the infused Bushmills. Within a matter of hours I could see a change in the colour. Unfortunately way too hard to pick up on camera.

……..and so the waiting game began. 1 day, 2 days, THREE DAYS! Below is a photo of day 3, you can fairly see a difference in colour. 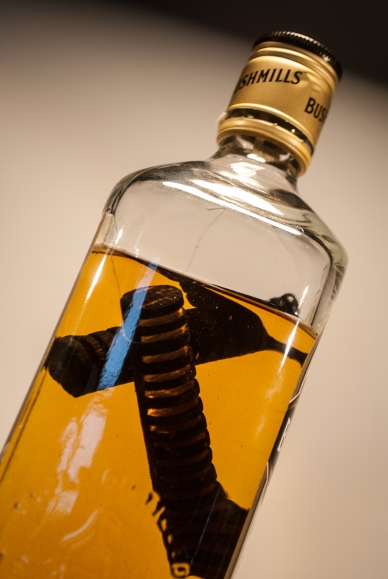 Straight away you can see the whiskey has truly changed it’s colour as it’s much darker. A deep golden browny orange.

Bushmills after using the infusion sticks.

Upon opening the bottle you can clearly smell the difference right away and what a smell it is. For me, I always find Bushmills has a slight smell of petrol, gasoline for people else where in the world. This smell is all but gone, with the smell of oak truly coming to the forefront. It still retains some floral hints but not as strong as before.

I hemmed & hawed about what way to do the taste test, Bushmills first followed by the infused Bushmills or vice versa. Having a fair understanding as to what Bushmills tastes like for me personally as I’ve had many a dram of it over the years with my Dad, I went for the infused option first.

On the mouth it still holds a smoothness but a smoothness that is noticeably different, a dryer one at that but not in a bad way. A warming of the mouth remains, with the hint of honey being ever more present to me. On the finish it’s not as long as others but still rewarding with tad more hint of spice.

Does it infuse Bushmills into the 21yo I was hoping for, or a 10yo, certainly not but it does add a different dynamic for the greater good.

With time & a bit of thinking I’d say great things could be done with A Little Oak Whiskey Infusion sticks & what fun it was with this little experiment. As the sticks can be reused I plan to choose a new whiskey & work on how long they remain in the bottle as my new years resolution (Thats one I can keep) to hopefully come up with something the whiskey infusion sticks work fantastically alongside.

As I said previously, without a doubt there is no better way than the traditional way of maturing whiskey. I am one who beleives there is no harm what so ever with innovation, surely it can only be a good thing in the long run. With all new products, it takes time to perfect them.

I can safely say in a few years time from now A Little Oak will have come along way from two brothers producing them at home. Lewis & Alex have a fantastic product on their hands.

Thank you to Lewis & Alex King for hooking me up with their product to try. I’d susgest checking out thier website & social media platforms. You never know, you oculd end up with a little new year infusion project yourself.

P.s. just a few outtake photos below if you fancy a gander.